Amnesty International Is Considering Legal Action For Misuse of Its Name

Recently, a Press Release (Urdu) bearing the letterhead of the Amnesty International was widely circulated through social media which purportedly condemned the killings of Hazaras and declared it as Genocide. The contents of the same PR were published in the Balochistan’s local newspapers. After thorough examination of the PR, HUM, UK contacted AI’s international secretariat to establish the authenticity of such statement. The AI, in subsequent emails, expressed their concern over genuineness of the PR and urged that all such statements related to its organisation, are issued by its headquarters which can be accessed by visiting its website. 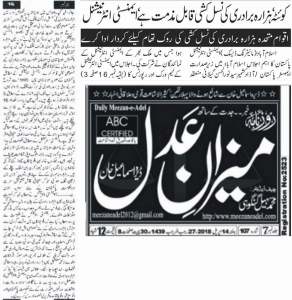 AI has also expressed intent to take legal action against all those misusing its name by issuing unwarranted press statements.

HUM, UK, appeals to all human rights defenders, activists and campaigners to exercise due vigilance before disseminating news from dubious and unreliable sources, specially when they pertain to persecution of beleaguered minority communities.