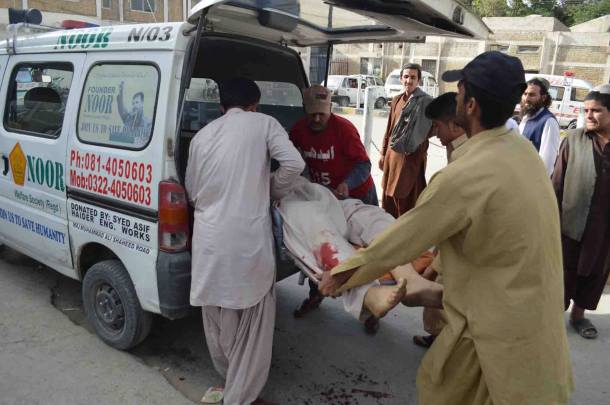 (Meezan Chowk Incident – A Dead Body Being Shifted To Hospita)

Another attack took the lives of five (5) innocent Hazaras in Quetta which has happened days after the meeting of the Hazara Diaspora with the Pakistani High Commission in London who assured of Government’s foolproof measures in securing the lives of people, especially of Hazaras, in Pakistan. While the lack of will of the Pakistan’s Federal and Balochistan’s Provincial Governments is profusely disparaging in taking decisive action against the so-called religious extremists who can terrorize the entire Quetta city with impunity, the deliberate silence and non-cooperation of the city-dwellers approves of their complicity in attacks against the Hazaras.

Pakistan has utterly failed to implement the true spirit of the 21st Constitutional Amendment which was approved in a joint session of the Parliament in January this year. Similarly, the implementation of the 20 Points Agenda of the National Action Plan is completely blurred given the existing waves of terrorist attacks against the minorities especially the Hazaras. The officially banned religious extremist organisations are still carrying out their mantra of spreading religious hatred, inciting derogatory slogans and glorifying killings of minorities including Hazaras under the nose of the Government and the law enforcement agencies. The defiant fully operational activities of internationally-designated terrorist organisations in Pakistan are an open secret which has further deteriorated the law and order situation in the country.

Seemingly, the Balochistan’s Provincial Government has turned a blind eye to the cold-blooded killings of the Hazaras although Balochistan-based nationalist parties are partners in power sharing in the province as well as in the Federal government.

These targeted attacks perpetrated against the peaceful Hazaras in the last 16 years have frequently occurred in bustling bazars and the city centre where the Pashtun community owns considerably large numbers of business establishments. The non-Hazara traders in the town witness these incidents but their reluctance in identifying the perpetrators corroborate the fact that they discreetly endorse these attacks in an effort to change the demographic landscape of the city.

This is about time that the non-Hazara city dwellers broke away from the confines of rote condemnations and helped contain such incidents.