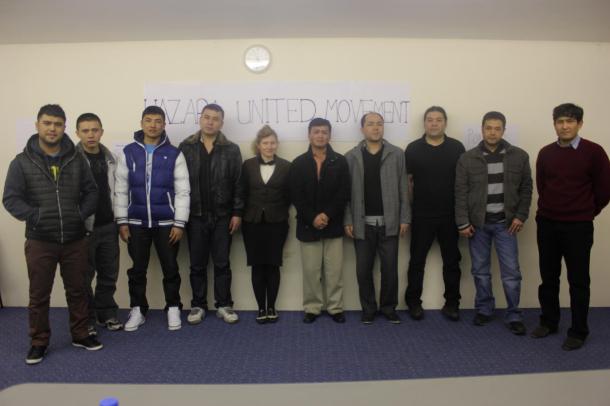 The office-bearers and members of HUM at its launch.

Hazara Diaspora have formally launched a political organisation in the UK to address the political needs of the Hazaras as well as providing them with a concrete platform to learn and apply politics practically. The inaugural ceremony took place on 27-02-2012 in one of the pre-booked halls of the City Temple, Holborn Viaduct, London which started at 2:30 P.M and finished at 5:00 P.M.

Zakir Rostami shouldered the responsibilities of the Stage Secretary who commenced the programme with the recitation of the Holy Quran. Later, he welcomed all the members and described the details of the event to be divided into three parts. The first part included 10 minute speeches of Liaquat Ali Hazara, Avaz Ali Wahidi and Carina Crowford. The second session incorporated the interactive questions from the speakers about the formation of the organisation etc while the third phase focused on election of the office-bearers.

Firstly, Liaquat Ali Hazara was invited to describe the fundamental principle of founding the HUM, its aims and objectives and the benefits of becoming member.

LAH welcomed and thanked his friends for sparing time to bear the national/Hazaragi responsibilities through HUM while explaining the principal aim of forming a political organisation. He maintained that we are re-writing the history of Hazaras by forming this Organisation as it is foremost initiative towards centralised political set up for the Hazaras in order that politico-universalism can be evoked within the Hazaras. To keep this in view, HUM shall be registered with the Electoral Commission of England and Wales in near future in that all the necessary requirements for the purpose have already been fulfilled and the registration will complete in the next few months. He revealed that it was the first time that any political organisation would be registered with the Election Commission outside Pakistan and Afghanistan which depicts the name  name Hazara. This registration will enable us to stand in general elections in the UK. Hence, the name Hazara United Movement (HUM) will appear on ballot papers in general election. He further said that the overseas offices of HUM shall be opened in other countries such as Pakistan, Afghanistan, Australia and other European countries in order to complete the practical steps towards centralised political set up. The overseas office of HUM shall also be registered with the respective election commission to take part in elections as well as achieving the target of running political activities through coordinated efforts. Talks are under-way with Hazara nationalists and political workers in other countries which will bear positive results. Explaining the aims and objectives of the Organisation, he mentioned the following points:

(i) To get the Hazara Diaspora recognized as a community.

(ii) To provide them with opportunities for transparent and fair representation at all levels.

(iii)  To provide opportunities and spread awareness among them for participation in international politics.

(iv) To increase awareness among them about Pan-Hazarism through coordinated activities.

He also expressed the will of the Organisation to create leadership and community organisation training programmes for the Hazaras immigrants in the UK so that they can play an active role in politics. In addition, Study Groups and Research and Analyses chapters have been established to evaluate the socio-political situations on scientific basis for viable solution.

The next speaker was Avaz Ali Wahidi who stressed upon the need that the new generation will have to come forward to take reign of the Hazara nation in their hands for prosperous future. We will have to take keen interest in politics so that we don’t lag behind other in politics in south and central Asia. Whatever decision you take today, it will definitely affect the future. As you have formed this Organisation (HUM) today, you must nourish it like a tiny plant to analysing and solving the political, social, educational and cultural predicaments of the people. The Hazara Diaspora in the UK face many challenges and our recognition as a community is one of the arduous tasks to accomplish. There are Hazara asylum-seekers in the UK whose applications have either been refused or in pending for years who, due to lack of proper guidance remain passive to seek solution to their problems and, perhaps, the volume of these unresolved cases are in thousands. Keeping in view the vulnerable security situation of Pakistan and Afghanistan, they cannot return home nor can they afford to live here illegally. I have mentioned only two of umpteen problems so far but I have had detailed discussion with Liaquat Ali Hazara over these issues and I am sure this Organisation has the potential to redress them. You will need to make this Organisation strong enough to solve these problems.

Later, Carina Crowford gave a speech on POWER. Carina has been working with Citizens UK as Community Organizer which has over 230 member institutions which include schools, colleges, universities and other charity organisations. She offered her volunteered services for the welfare of Hazaras in the UK and devised different pragmatic ways to change the strength of the people into power to becoming a recognized community in the UK. She also maintained that Citizens UK shall coordinate with the Hazara United Movement to provide training opportunities to HUM members. She suggested how HUM can meet its monthly expenditure through its membership subscription to avoid financial hurdles.

The second session included questions and answers which was hosted by Muhammad Raza.

In the third session, the following members were unanimously elected the office-bearers of HUM.

Abdullah Gulzari (Coordinator for Croydon, Avaz Ali Wahidi voluntarily offered his services to share the duties with the coordinator)

The ceremony ended with notes of thanks.