A delegation of Hazara Diaspora meets with the Pakistani High Commissioner in London.

Group picture of the Hazara Delegates with the Pakistani High Commissioner

A seven member delegation of Hazara Diaspora Led by the Chairman, Hazara International Forum of Great Britain and the Chairman, Hazara United Movement (HUM), United Kingdom were called on the Pakistani High Commissioner for the United Kingdom, Mr. Wajid Shams-ul-Hasan on 25-07-2003 in the Pakistani High Commission, Lowndes Road, London. The meeting started at 15:00 hours local time which continued for over an hour, focusing on the reservations and concerns of the delegation about the ongoing genocide of Hazaras in Pakistan. 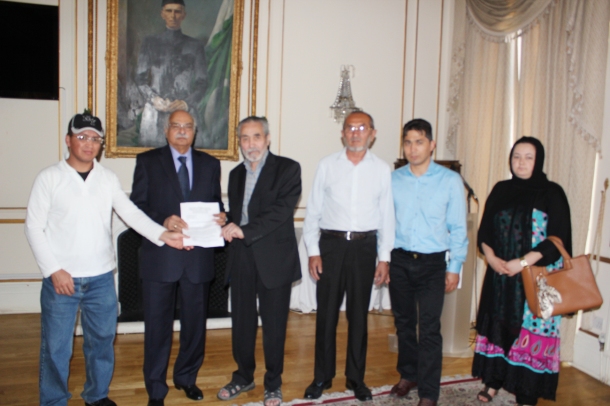 Pakistani High Commissioner being presented with the Petition.

The High Commission was presented with a petition which detailed genuine concerns and reservations including five points demands, duly acknowledged as legitimate and constitutional. The High Commissioner also assured to forward the petition to the federal and provincial governments for implementation. The Chairman, Hazara United Movement reiterated the need that the government must formulate a viable strategy to providing foolproof security to the Hazaras. He also demanded that the Pakistani High Commission must pursue the progress of the petition and intimate both HIF and HUM of its progress within reasonable time which the latter agreed to perform. The five points are as follows:

(i) That the federal government must provide all support to the Balochistan’s provincial government and exert meaningful pressure for an immediate and complete operation against the hideouts of Lashker-e-Jhangvi in Quetta and Balochistan.

(ii) That fast-track special courts be established to penalize the religious extremists and terrorists.

(iii) That the government must track the elements of intelligence agencies and security personnel having links with the terrorists and take immediate action against them.

(iv) That the foreign and domestic financiers of the terrorists and religious extremists be tracked down and prosecuted immediately.

(v) That a family member of the affectees/victims of these incidents of the last 14 years be provided government job as per his/her academic credentials and qualifications.

The High Commission’s sources also promised to arrange a meeting of the delegates with the Prime Minister of Pakistan during his next visit to the United Kingdom.

Campaigning, Advocacy and Capacity Building Organisation Which Is Working for the Rights of Minorities and Indigenous Peoples.
View all posts by Hazara United Movement (HUM) »
← HUM mourns the targeted killing of four Hazaras on Masjid Road Quetta
The Government must immediately initiate operation clean-up against the terrorists in Quetta. →